Another of the greatest Mexican masked wrestlers/superheroes was the BLUE DEMON (El Demonio Azul) whose real name was Alexander Munoz Moreno. He was affectionately referred to as "Blue" by most of his fellow masked crime-fighters. Like Santo, Blue Demon (when he wasn't kicking booty in the ring) was out there investigating weird phenomena, hunting monsters and saving hapless souls from the likes of killer zombies, lecherous vampires and wacky mad doctors.

Born April 24, 1922 in Rinconada, Nuevo Leon, he was the fifth of twelve children in his family. His father was involved in agriculture, but at a very young age, Alexander dropped out of school and moved to the city of Monterrey, where his uncles got him a job working on the National Railroad. His fellow railroad workers gave him the nickname "Manotas" referring to his large, powerful hands. A chance meeting with the famous Mexican wrestler Rolando Vera piqued his interest in Lucha Libre, Vera even offering to tutor him and help him start a career.

He began wrestling without a mask in Laredo, Texas. His first match was against Chema Lopez on March 12, 1948, a match which he won handily. Adopting the mask and persona of The Blue Demon, he headed back to Mexico to start a real career. His first appearance as The Blue Demon was in Mexico City in September of 1948, where he fought Benny Arcilla. Blue began his career in the ring as a "rudo" (bully or bad guy). From there, he formed a famous team with another well-known Masked Luchador named The Black Shadow, and the two became known as Los Hermanos Shadow over the next few years.

In 1952, the famous wrestler SANTO beat and unmasked The Black Shadow in the ring, which triggered Blue's decision to become a technico (good guy) in the ring, as well as a legendary feud between The Blue Demon and Santo that culminated in Blue's beating Santo in a well-publicized series of matches in 1952 and again in 1953. Their rivalry never really ended in later years, although they appeared together in a series of horror films, since Santo always remembered his defeat at the Blue Demon's hands.

Blue Demon first appeared in cameos in a couple of innocuous wrestling/action flicks made in 1961, but in those 2 films he was just one of several wrestlers who appeared in the background. But in 1964, Enrique Vergara, the producer of the then-successful SANTO movies, decided to diversify a bit and allowed the 42-year-old BLUE DEMON a series of action/horror films of his own, their plots and style closely mirroring the Santo movies in every way. It is believed Vergara wanted to cultivate a second movie star, since at the time Santo was looking to get himself a whopping raise.

From 1964 to 1977, Blue Demon starred in a total of 25 action/horror/sci-fi films, and more recently was the subject of a feature-length Mexican documentary entitled "BLUE DEMON, THE CHAMPION" (1989). Of those 25 films, SANTO co-starred with him in nine of them. Although they co-starred in these films however, the two super-stars were never good friends in real life. Mexican film buffs especially loved the movies that featured both SANTO and BLUE DEMON together. They were the ultimate tag-team!

In 3 of his films , BLUE DEMON starred as the leader of a squadron of masked superheroes known as THE CHAMPIONS OF JUSTICE (which for some reason never counted Santo among their ranks). Membership in the CHAMPIONS included such legendary figures as Mil Mascaras, Tinieblas, El Rayo de Jalisco, El Medico Asesino, El Fantasma Blanco and Superzan!

Blue Demon retired from the ring in 1988 at the "La Arena Mexico", where he appeared in a last match in which he teamed up with his son, Blue Demon Jr. who today has a successful career of his own.

Sadly, we have learned that BLUE DEMON passed away just before noon on Saturday, Dec. 16, 2000 from natural causes. Apparently Blue Demon suffered a fatal heart attack on a park bench near a subway kiosk while on his way home from his regular morning training session at a gym, where he enjoyed teaching others his fighting skills. Although an attempt was made to get him to a hospital, he was unable to be revived. He was 78 years old.

Blue Demon was laid to rest wearing his trademark blue mask, the mask he never took off in public since he always kept his identity a secret. Mexico was in mourning and fans of Lucha Libre all over the world were grieving their loss.

The legendary hero in the blue mask and cape is gone. Blue Demon has joined his friend and fellow Lucha Libre super-star Santo in eternity.

We here at "SANTO AND FRIENDS" will continue to do our utmost to help keep the Legend of Blue Demon alive for fans of Lucha Libre and Mexican cinema everywhere! Now let's look at a complete Filmography of Santo's ringside pal and fellow vampire-fighter, The BLUE DEMON.....

(Blue Demon vs The Satanic Power)

(Santo had a cameo appearance in this film)

(Blue Demon In "Shadow of The Bat")

(Blue Demon vs The Infernal Spiders)

(Blue Demon vs The Infernal Brains)

(Blue Demon vs The Diabolical Women)

(Blue Demon In "Passport To Death")

(Santo & Blue Demon vs The Monsters)

(Santo & Blue Demon In The World of The Dead)

(Santo vs Blue Demon In Atlantis)

(The Champions of Justice)

(The Mummies of Guanajuato)

(Blue Demon & Zovek In "The Invasion of The Dead")

(Blue Demon In "Night of Death")

(Blue Demon In "The Yellow Mafia")

(The Champions of Justice Return)

(Santo & Blue Demon In "The Beasts of Terror")

(Triumph of The Champions of Justice)

(The Son of Alma Grande)

(Mansion of The Seven Mummies) 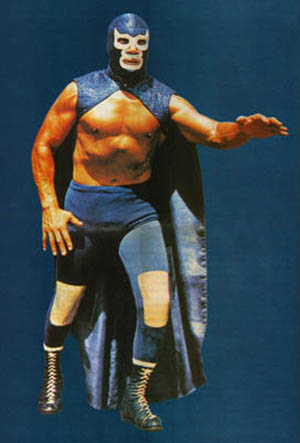